A common misconception people have about fairy tales is that they are somehow irrelevant because they’re not realistic reflections of our life experience. Fantasy and the fairy-tale are purely escapism, a way to ignore reality and it’s inconvenient laws of nature. “Life is not a fairy-tale,” people often say, but I couldn’t disagree more. I think what they mean to say is, “Life is not a Disney animation film.”

Despite my love for Disney and the joy they bring to my life, they have butchered the integrity of fairy-tales for generations. The real fairy tales, the ones written and collected by the Brothers Grimm, Perrault, Andersen and others, are generally brutal and often tragic. Take a look at the original tales of The Little Mermaid, Cinderella, or various origins of Little Red Riding Hood. They are not pretty, friends. Tragic love, cannibalism, and pecked out eyes. Some of them don’t even end well, and a few of them do not live happily ever after. They don’t even live. Why then do we say that life is not a fairy-tale as though we have somehow been duped? Consider the following statement made by a man who penned some of the most tragic fairy tales.

“Life itself is the most wonderful fairytale.”

Was this man delusional? I don’t think so. He didn’t mean that life is all butterflies and fairy dust and happily ever afters. There’s a sprinkling of that in real life. Of course there is great joy in this life, but many will suffer betrayal, heartache, and tragedy, and children are no exception. Fairy-tales, I believe, are great metaphors for real life. It’s beautiful, but it’s also ugly. It’s happy, but it’s also sad. It’s sweet, but it’s also bitter. Sometimes there is no explanation for why things happen.

It is all wonderful.

So I implore you, whenever someone says “Life is not a Fairytale,” you should yell “YES IT IS YOU IDIOT!”

In a magical kingdom where your name is your destiny, 12-year-old Rump is the butt of everyone’s joke.

Rump has never known his full name—his mother died before she could tell him. So all his life he’s been teased and bullied for his half-a-name. But when he finds an old spinning wheel, his luck seems to change. For Rump discovers he can spin straw into gold. Magical gold.

His best friend Red Riding Hood warns him that magic is dangerous—and she’s right! That gold is worth its weight in trouble. And with each thread he spins, Rump weaves himself deeper into a curse.

There’s only one way to break the spell: Rump must go on a quest to find his true name, along the way defending himself against pixies, trolls, poison apples, and one beautiful but vile-mannered queen. The odds are against him, but with courage and friendship—and a cheeky sense of humor—Rump just might triumph in the end.

In Defense of Fantasy

Sometimes fantasy is written off as the unwanted step-child of “real” literature. Practical persons may consider fantasy as merely escapism, a way to ignore reality and its inconvenient laws of nature, and therefore a waste of time. However, the best fantasy, and any fiction, is not so much about escapisms as offering a lense in which to view the real world, so that when they return from the pretend world they’ve occupied for however many hours and days, they have greater understanding of their own world. Comparisons and metaphors are powerful tools in revealing truth.

It is not only about a girl having adventures in a bizarre world that defies logic, but also about that hazy line between childhood and adulthood, work and play, and the difficulty of making decisions and choosing paths in a world that makes no sense, particularly to children who have not yet been conditioned or resigned to social expectations. I think our world is more bizarre and fantastical than most adults are consciously aware of, even outside of social structures. Giraffes anyone?

Fantasy jolts us into new ways of thinking, so we can reconsider our own world and various social, political, familial, or personal issues. While a child may read the book for entertainment, at some point they make comparisons to their everyday experience, and perhaps discover certain truths or conflict that they might not otherwise had they not slipped into another world. If the fantasy makes us dissatisfied with our real world, hopefully we can endeavor to change it for the better. I for one am dissatisfied with current modes of transportation and would really like to learn how to apparate.

Comparable Titles for RUMP: The True Story of Rumpelstiltskin by Liesl Shurtliff

There are LOTS of fairy-tale retellings out there, and they could all be compared to RUMP in one way or another, but here are a few books that I think give a reader an idea of what they can expect from RUMP.

A more recent comparable title is Adam Gidwitz’s A TALE DARK AND GRIMM. They both weave in other fairy-tales, so you get a rich sense that all fairy-tales are connected, and things that happen in one tale might affect another. The children in both GRIMM and RUMP go through some very difficult things and face brutal foes, (though I have to say Hansel and Gretel probably trump Rump on the brutality contest. I’m not so violent or gory.)  . 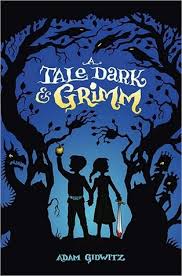 And last but not least, I just had to include THE TRUE STORY OF THE 3 LITTLE PIGS by John Scieska, because my book is RUMP: THE TRUE STORY OF RUMPELSTILTSKIN. They each show a classic fairly-tale from the villain’s point-of-view in a humorous and endearing way. One of my biggest goals for RUMP was to get the reader to not only understand and sympathize with Rumpelstiltskin (probably one of the most demonized fairy-tale villains) but to actually love him and root for him. I had a lot of fun rising to the challenge! Also, check out our giveaways this week, which includes a copy of MAY B. by Caroline Starr Rose!

Liesl Shurtliff & The Inspiration for RUMP

I was actually brainstorming another story idea when I imagined a world where names are much more than just a title, but a person’s destiny. Instantly my mind gravitated toward the Rumpelstiltskin tale, for if there was ever a name of great importance in a story, it’s that one. And yet, for the crucial role he and his name play in the story, we know so little of Rumpelstiltskin in the traditional tale. We know nothing of where he comes from, what his name means, how he learned to spin straw into gold, or why on earth he would want someone’s first born child. I wanted to tell a story from his point-of-view, not only so we would understand Rumpelstiltskin, but also love him. Shortening his name to Rump got me on the right track and everything grew from there.